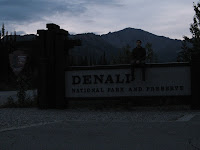 Just returned from Alaska.  Overall the trip was a lot of fun.  The landscape was nothing short of spectacular and I’m so grateful for having had the opportunity to go there, but leaving your little sister behind, knowing you’re going to be 10,000 miles apart and having no idea when you will see her again pretty much sucks.

The highlight, at least for me, was the couple of days spent in Denali National Park.  It wasn’t nearly enough time; at least a month would be needed to even begin to do it justice, but even just the few days we spent camping there and exploring the interior of the park were incredible.

The most interesting part was trying to get back to Anchorage from Denali.  We left the park around noon driving south on Route 3, the only direct road between Denali and Anchorage.  Hannah and I had picked up two hitchhikers who were trying to make it to the airport in Anchorage to catch their flight back to New York after having spent 6 weeks hitchhiking around the state.  They were cutting it really close to their departure time, but we felt confident that we could get them there in time.

After thirty minutes we approached a construction worker in the road who was bringing traffic to a halt.  Coming to a stop, we watched as the car in front of us carried on a muted exchange with him, then proceeded to pull a U-turn and return in the direction we were all coming from.

We pull up next and ask what’s going on.

“There’s been an accident” he explains,

“A natural gas tanker rolled just down the road”

“You’re going to have to turn around, go through Fairbanks and hook around on Route 2”

That’s 15 hours minimum, as opposed to the 4 hours we were planning on.  Unbelievable.

We pull a U-turn and start back up the road trying to figure out what we’re going to do.  Drive it?  Go back to Denali for another day or two?  There’s GOT to be another way.  Either way, the two guys in the back seat  have officially missed their flight.  We pull out the map and discover one road that we could take that would allow us to skip having to go all the way up to Fairbanks.

After a quick stop at one of the gas stations that are so few and far between on the road, we turn East onto the Denali highway.  “Ok” we’re thinking, “so this is going to take a little longer than expected, but we’ll get to see a lot more of Alaska this way.  Things could be worse”

After 10 minutes down the ‘highway’ the pavement stops and becomes gravel.

“This can’t possibly be gravel for the next 150 miles”

Oh yes it can

For the next 3+ hours we proceed to speed along twists and turns on the Denali highway taking in the incredible scenery.  At least I assume it was incredible.  Bouncing and sliding along the ‘highway’ everything becomes a little blurred, your back starts to hurt and you’re more than a little preoccupied with the thought “Please don’t get a flat tire, please don’t get a flat tire, we are SO screwed if we get a flat out here”  Over the course of the 150 mile stretch of road we see only a handful of cars and there's literally a whooping two places to stop, all of which not-surprisingly have large signs anxiously proclaiming “Tire repairs performed here!!!”

We made it across barren landscape, car and tires intact, though what used to be a black Camry is now definitely a brown Camry.

Only 7 more hours to go

The rest of the trip goes relatively smoothly.  Down through Gakona, Glennallen, Palmer, and the now (unfortunately) famous Wasilla.  After a while it’s almost difficult to stave off the creeping indifference to the beauty of the mountains, rivers and glaciers since there appears to be no end to them.  Finally, descend back into Anchorage.  We drop our traveling companions off at the airport, wish them better luck on their flight home than we had on the drive and say goodbye.  The rest is details.

Moved Hannah into her dorm and we went shopping WAY too much to outfit her with all the typical college-dorm paraphernalia.  There was a day-long orientation for students and parents at UAA.  I was a bit unsure of what was expected of me, though figuring I was there on my parents behalf, when the large group of student and parents split up I found myself sitting in on the parent sessions and on the receiving end of some very odd and perplexed looks.  The comments I got ranged from the kind:

“Umm, aren’t you supposed to be in the other room with the other students?”

“You have leave right now, you can’t be here in this meeting, this is for parents only!”

Though they probably never fully believed me, the other parents did come to accept the presence of a 26 year-old who was apparently claiming to have an 18 year-old daughter that he was dropping off for her first year at college...They grow so quick... 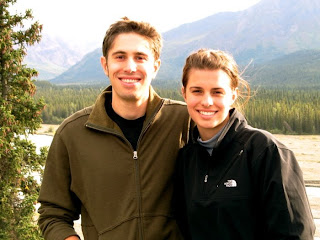 In the end I actually came back home to Connecticut one day earlier than planned because as time went on I realized how much I still had to do to get ready and pack for Africa and my planned one day layover back home just wasn’t going to be enough.  A painful good-bye ensued at the airport curb followed by a sprint to the gate since I had been unable to pry myself from her any sooner than I absolutely had to.

The thought of having to get on another flight in 2 days, this one destined to traverse one ocean and two continents is incredibly exciting but a little sad too.  I don’t expect the coming good-byes to be any easier but they’re inevitable and are a necessary part along the coming journey.