...when first
I came among these hills...
I bounded o'er the mountains, by the sides
Of the deep rivers, and the lonely streams,
Wherever nature led: more like a man
Flying from something that he dreads, than one
Who sought the thing he loved.
...I cannot paint
What then I was.  The sounding cataract
Haunted me like a passion.
-William Wordsworth
Leaning forward against my seatbelt to peer out the small, plastic window, I struggle to catch a glimpse of the land before touchdown. The effort to adjust my eyes from the bright fluorescent cabin lights of the large Airbus to the infinite blackness outside proves nearly impossible. The only thing to be seen is the turbulent ocean of air and condensed moisture churning ominously and is visible only when the lightening scatters its fractious beauty throughout the dark and formless clouds. Then, just after giving up the effort, we break through the cloud layer that had separated us from contact with the ground, the same one, though now on the opposite side, that obstructs our view of the moon and stars.  Small ground fires and the orange lights of Entebbe come into focus and within minutes we are touching down and coming to a slow stop at our gate.
Uganda
Just five days ago I was in Alaska, a 10-hour difference in time and I imagine, just a slight deviation geographically and culturally from where I now find myself.  Thus far the trip over here has gone surprisingly well. Despite my occupation, I still find myself marveling that for the right price and a little patience to endure over 14 hours in the air, one can skip from North America to Europe to East Africa in about 1 day.
Stepping off the plane at Entebbe International and onto African soil, a first among many more to come for me, I find myself almost dizzy with excitement and awe.  After spending the last 30 hours in airport terminals and passenger jets breathing in their stale, recycled air, walking outside and being hit by the warm and balmy air is a bit of a shock.  Palms sway in the humid breeze, a breeze that carries with it the smell of Lake Victoria which lies not even a mile away.
A short, thin Ugandan man, bearing a smile and blue shirt that reads 'AirServ International' approaches and introduces himself. His name is Godfrey and he tells me that he's my ride. Just to make sure I ask to see some kind of identification which he gladly produces but I'm too tired to give it any sort of thorough examination. After a few pleasantries and collecting my 2 checked-bags we hop into a old, run-down van bearing the same name as his shirt. With Godfrey driving from the front right seat, myself in the left, the sights of Entebbe rush past my open window and I relish the feeling of being on the ground once again. Ten minutes later the two of us pull through the gates of the AirServ crew house.
Despite the fact that most of our immediate neighbors live in shanty houses held timidly together by decrepit wooden planks, their walls consisting of tarps and roofs of rotting tin sheeting, the neighborhood is, relatively speaking, decent. Not more than a mile down the road is the mansion (one of many I'm told) that houses the Ugandan President. Later the next day, a gaunt-looking shopkeeper tells me through a toothless grin that it is referred to comically as "The White House". 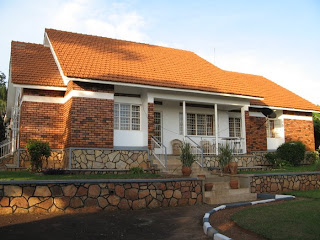 A four bedroom, single-story house enclosed by walls with a heavy metal gate dictating who enters and who leaves, the AirServ-Entebbe house is surprisingly nice. A guard stands on constant watch as well as a worn-out looking German shepherd named Jill. Jill's purpose seems to serve more as companionship to the guard and the constant ebb and flow of inhabitants rather than as any security measure since she is much more likely to approach you looking for a belly-rub and food than to chase away any would-be trespassers. Upon arrival I'm greeted by Patrick and Cos, two other AirServ pilots. Both are here for several days for aircraft maintenance before splitting off and departing to Johannesberg and Nairobi respectively. So far things have gone relatively well and apparently I should consider myself lucky since talking to my two new co-workers, I am told of how often flights here are delayed, baggage gets lost and people arrive at airports to find no one is there to pick them up.
Despite the fact that I've been up for more than 34 hours straight I end up on the back of a "boda-boda", a small 200cc (at best) motorcycle for hire screaming down the dark, unlit Entebbe streets in search of food with the other two. Our first stop is Four Turkey's to gauge tonight's nightlife. It's an experience that I'm sure will prove impossible to forget. We're there for no more than 20 minutes, yet 19 of those minutes are consumed with literally pushing away the incredibly persistent women who are looking for 'work' that night while insisting that we aren't interested. The conversation becomes borderline impossible with their constant hovering presence and so deciding it's not worth the hassle we move on.
Four Points is the next destination. An outdoor restaurant popular among the transiting AirSev pilots, it's a quiet locale with an extensive and varied menu, but particularly good Indian food. I still have a million unanswered questions about AirServ so much of the time is passed trying to get a sense of what to expect from life in Goma and the job in general.
Finally back to the house. I'm so tired I lay down on my bed, telling myself it will only be for a minute. Four hours later and still very dark out, I wake up, fully clothed with my legs still hanging off the bed and my mosquito net still up. Trying to get a few more hours sleep proves impossible between the jet-lag and roosters doing their normal pre-dawn routine and I drift in and out of sleep in short, unsatisfying fits. When I do wake up for the last time around 7am the very first thing my eyes happen to focus on strikes panic into me. As clear as day, at the opposite end of the bed, fixed to the top of my mosquito net and clearly on the wrong side is one lonely tetsi fly.
"Great, I've been here less than 12 hours and I probably already have malaria."
I make sure he dies a quick death but that does little to allay the sick feeling in my stomach about the prospect of getting malaria. I'm sure I'm fine, but I've heard and read plenty of horror stories about what is entailed when ones contracts malaria. Even though I've been assuming that I'll get it at some point (it seems everyone who comes here does), I don't think I'm ready for it yet. Maybe after a few months I'll be up for the challenge.
There are plenty of other firsts and excitement during the first couple of days in Africa:  a few of us went to Kampala one night and I thought I was going to die (or at least get horribly maimed - getting used to public transportation would take some adjustment I quickly discovered); getting lost late one night on the dark streets of Entebbe, wandering around for almost an hour trying to find the AirServ house, asking locals for directions to the only close landmark that I knew: a daycare center not far from the house with the creepy name "KissyFur"; eating at the Imperial Botanical Gardens on the shores of Lake Victoria with monkeys hovering in the trees above and around the table waiting for scraps of food or a thoughtless diner to not pay proper attention to his plate; and plenty of sleepless nights, tossing and turning, listening to thunderstorms pass through the middle of the night followed by the sound of goats and chickens, insistent on reminding everyone of the arrival of morning, as if it might be missed.
But mostly I was wrapped up in my own thoughts, trying to take it all in, anxiously awaiting the arrival of Saturday's flight that would take me to my new home, to Goma, to Congo, to see what kind of life was awaiting me there. Saturday arrived soon enough, and I realized that all the reading and pictures and questions would prove useless to prepare me for the initial shock of stepping off the plane and setting foot there for the first time.
Posted by Joshua at 7:17 PM

Josh:
Well, now I have typed you three comments!!! since the first two did not go through since I could not remember my google account password...
it seems like just yesterday you and Kristyn and Matt were collecting Easter eggs in your front yard, and now you are flying airplanes around Africa!! WOW.
Matt and Melanie, his wife, just had a 9lb 2 oz baby boy named Caleb on Monday, so we are feeling so very blessed by God.
Sure glad God saw fit to have our family share so much with yours....He knew what he was doing when he moved you guys around the corner from us!@! Would love to hear from you.
Love, Al and Kathy Gledhill
Friendlydrvista@yahoo.com