To Africa, via Alaska 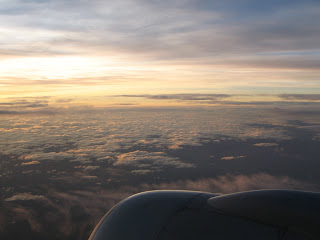 Over an unfamiliar landscape at 34,000 feet the sun has been hanging just above the horizon for the past 3 hours in a seemingly suspended, perpetual sunset. Hopelessly, my fellow travelers and I pursue it westbound, only for the moment and for another four hours it appears that we are succeeding.

Somewhere over the expansive canadian provinces, we are making our way toward Anchorage. The plan is simple: cram in as much of Alaska, it’s mountains, rivers, inlets, glaciers, towns and cities all with my sister, quite possibly my favorite person in the world. Yeah, there’s the whole “moving-her-into-the-dorms-of-UAA” the official purpose of my trip, but....being my first time to Alaska I’m hoping we will be able to take in as much of the state as possible.

I also can’t think of a better way to spend 10 of my last 11 days in the U.S. The day after returning from Anchorage I set off for, what is to me, the huge and gaping unknown of Africa. After months of planning and years of dreaming I’m finally going - flying for AirServ is actually happening.

Provided everything goes according to the current plan my ultimate destination and future home for the next year will be the city of Goma in the far eastern reaches of the Democratic Republic of Congo or DRC. A city hemmed in by Lake Kivu to the south, one very active volcano a few miles to the north and refugees of the past and current conflicts of Rwanda and Congo, Goma serves as one of the largest and oldest bases of operations of humanitarian flights for AirServ International.

For the past few months I’ve been bombarded with questions about AirServ: What will you be doing? What will you actually be flying? Will you be carrying a gun over there? What are the living conditions like? Why on earth are you doing this? Some of the questions I’ve been able to answer, some I haven’t. Hopefully sometime in the near future I will have an answer of sorts to them all.

But for now, I’m content with the questions and the unknown. For so long I have had answers, a plan, an order in my life and a fairly intentional direction. Though over time those plans have steadily changed and now I find myself on a course whose path and destination aren't so clear to me and I kind of like that. So for now, I find myself relaxing in the vast, expansive unknown of where life is taking me, except for knowing that in the immediate future, it is leading me to the Congo, that is, right after a quick stop in Alaska.
Posted by Joshua at 10:18 PM

On my, when did you learn to write like that? My favorite line was the one about your sister. Of course I would think that - I'm your Mom. I can't wait to read more. So hurry up and keep writing. I may be the first person to comment, but I know I won't be the last.

All my love, Mom

HEY!!! so let me just start off by saying i miss you SOOOOOO much, its unreal! i cant wait to see! i ahve to agree with mom, where did you learn to write like that?! and my favorite sentence is about me too lol! i love you so much, please be safe!

Josh - Abandon the Empire !! I guess we will have to talk about that one when you come back to CT. Hope all is well with you. Your parents keep us up to date on the latest. God Bless and keep your wings level and watch for the sharp bend in the road when you land!